Use Airport windfall money to implement Twenty’s Plenty for Manchester

Manchester Council should use part of the £14million windfall it received from Airport shares to introduce 20mph limits on Manchester’s residential roads say local Lib Dems. Nearly two years ago Chorlton Lib Dem Cllr Victor Chamberlain put forward a successful Council motion calling for 20mph limits on all of Manchester’s residential roads. Cllr Chamberlain has now applied to use part of the Council’s Clean and Green fund established from the airport dividend to see them rolled out across the city.

Cllr Chamberlain said: “20mph limits not only help save lives and prevent road injuries but they also make our roads more useable for everyone. 20mph limits encourage more people to walk and cycle, result in fewer greenhouse gases and reduced noise pollution.

Introducing them on our residential roads would be a good way to help mitigate the environmental impact the Airport has and make our city cleaner and greener.”

South Manchester MP John Leech , who won BRAKE's Parliamentarian of the Year for Road Safety, said: "The Council has received a one off windfall from the Airport group. Manchester Liberal Democrats are rightly calling for this money to be invested in our future. Introducing 20mph limits will prevent countless road casualties and injuries but it will also make our residential roads nicer places to be and more environmentally friendly."

Posted by Chorlton LibDems at 14:56 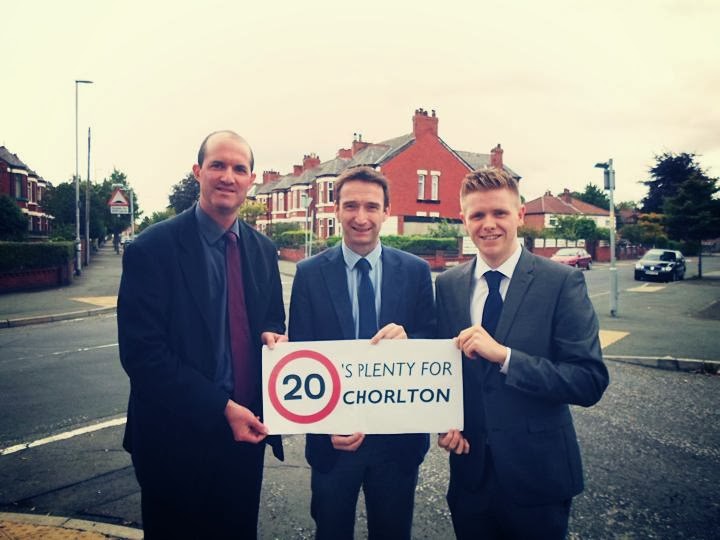